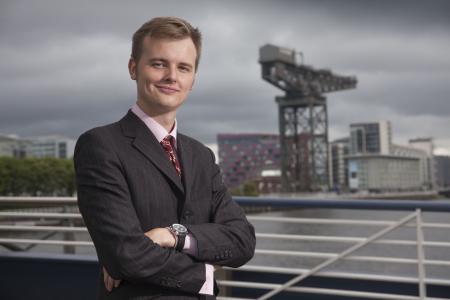 A Scottish aerospace company has announced plans for the UK’s first space mining mission which aims to extract and process materials from asteroids.

Asteroid Mining Corporation, (AMC) founded by Mitch Hunter-Scullion, is working alongside academic partners to develop the Asteroid Prospecting Satellite One (APS1) with the goal of identifying platinum group metals deposits on Near Earth asteroids.

The company has received support from Business Gateway and plans to build the APS1 in Glasgow at a cost of £2.3m creating seven new jobs in the city’s thriving Space industry.

They also received support from Tontine; desk space for one week that allowed them to draft a private Members Bill, an ammendment to the UK Space Act to allow the extraction of materials from asteroids.

Mitch and his team have calculated that a single metallic asteroid of 25 metres in diameter, contains approximately 29 tonnes of platinum worth around £725m.

In 2020, AMC intend to unlock this economic potential by launching APS1 to conduct a spectral scan of Near Earth Asteroids in order to determine which contain the highest concentrations of Platinum and which will be viable candidates for mining.

Mitch said: “Our goal is to develop ground breaking technology that will eventually enable the extraction, processing and use of materials derived from the many millions of asteroids known to exist near Earth. The APS1 will be our first step to achieving this success. The APS1 will be a spectroscope space telescope which will gather data on target asteroids and will act as a test for some of our technologies which we will scale up later for actual mining missions. Our crowdfunding campaign to help us finance the cost of the APS1 is now up and running and we’re confident we can attract sufficient investment.

“I set up AMC in 2016 after completing my dissertation at Liverpool Hope University on asteroid mining. Whilst researching for it I realised that there were few companies that have been set up with the intentions of mining an asteroid, with none being in the UK. It was a topic that fascinated me and when I finished university I decided to set up AMC and begin working on developing technology which will open up the possibilities of an off-Earth commercial market.”

With no previous business experience, Mitch sought support from Business Gateway who offered help in a number of areas.

Mitch added: “Business Gateway were great in helping me understand what support was available in Scotland for new businesses. The one-to-one sessions were extremely valuable as I was able to access advice on the topics that were most pressing. Business Gateway also put me in contact with Scottish Enterprise and helped with networking opportunities.”

AMC are also working with the International Institute of Air and Space Law at Leiden University to draft a proposal for a UK Space Resources Activities Bill. The company believe this legislation is vital to the development of the space mining industry within the UK as it allows British based companies the rights to prospect for and extract mineral resources from asteroids, the moon and other celestial bodies.

Mitch added: “This Bill will allow the UK to become a major global player in the rapidly growing space mining sector and become the third country after the USA and Luxembourg to develop such forward thinking legislation. Our vision is that other similar businesses will relocate to the UK and we will develop a thriving industry, making us a global hub for space resource activities.”

Bill Cameron of Business Gateway said: “AMC is a unique company but still has to go through the same processes as any other new start up. Our expert help allowed Mitch to learn and understand what he had to do in order to successfully set up his company but also plan for future growth.”