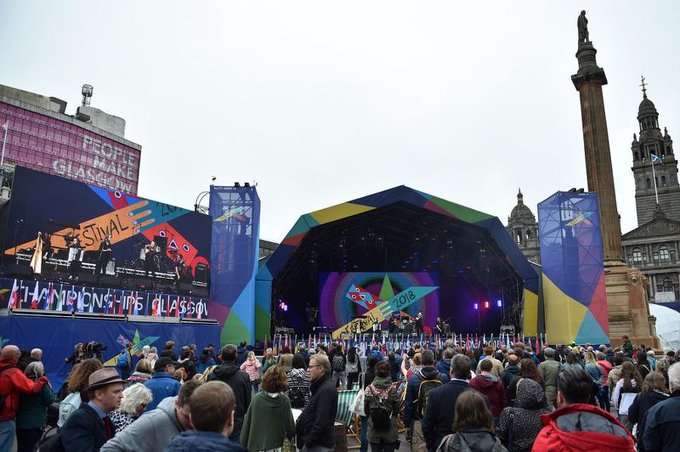 Stunning images of Glasgow and Scotland were promoted to a TV audience of more than 1.4 billion during the staging of the hugely successful inaugural European Championships last summer.

The official evaluation of the Glasgow 2018 European Championships revealed the substantial national and international exposure enjoyed as the multi-sport mega event was broadcast on free-to-air channels across 43 European countries.

And with online and social media coverage included, the audience for the 12 sports across Glasgow and co-host Berlin, who staged the Athletics, reached a massive 2.9 billion in the key tourism and business market of Europe.

In total the media exposure for Glasgow and Scotland was worth more than £250 million in PR value as millions of sports fans enjoyed the 11 days of Aquatics, Cycling, Golf, Gymnastics, Rowing and Triathlon.

Across the UK the BBC reported an average audience of more than 1 million with a total reach of 20 million, in excess of established events such as the Rugby Six Nations, and just below the Gold Coast 2018 Commonwealth Games.

The BBC also reported that the event attracted a higher female and younger audience than many other sporting events.

Across Glasgow and Scotland more than 560,000 people, more than double the projected number, attended a sport session, a Festival 2018 offering or visited the hugely popular George Square and 'GO LIVE! at The Green' live sites.

Final attendance figures show 137,000 tickets for sport were issued, packing each of the 12 venues with roaring crowds to support the new champions of Europe. More than 54,000 attended free sporting events such as the Cycling Road Race on the streets of the city, and the Open Water Swimming at the stunning Loch Lomond.

In total 97 per cent of spectators from Glasgow were proud that their city, renowned for the warm welcome of its residents, was hosting the mega event.

The athletes were accompanied by 3,760 accredited officials and delegates. In addition to the value of the worldwide PR exposure for Glasgow and Scotland, an independent economic assessment showed significant amounts of expenditure from these visitors and participants in the event, as well as millions of pounds of contracts won for Scottish companies.

As a result of hosting the European Championships there was just over £34 million of additional spend in Glasgow and Scotland, and an estimated £24 million of contracts awarded to Scottish companies, with £8.5 million of those going to companies based in the Glasgow City Region.

Significant effort was made to create social and community benefits by the organisers. Team 2018, the 3,600 invaluable volunteers who were key to making the event such a success according to those surveyed, were a diverse workforce, exceeding targets for the number of Scottish and Glasgow residents (representing every local authority areas in the country), new volunteers, including significant numbers of people aged under 26.

Around 50 per cent of the volunteers said they we would do more volunteering as a result of taking part in Glasgow 2018. Another 17 countries were represented across Team 2018.

Continuing the delivery of sporting and cultural legacy created by the Glasgow 2014 Commonwealth Games, was also a key objective of the event. More than 20,000 people took the opportunity to try one of the sports across all Glasgow 2018 venues and approximately 30,000 people said they learned more about healthy lifestyles as a result of visiting 'GO LIVE! at the Green'.

Alongside the sport, Festival 2018 was a world class cultural festival which created a vibrant live city experience, with 2,400 artists and performers contributing, alongside more than 5,600 voluntary and non-professional performers. In total more than 370,000 people visited a Festival or Live Site.