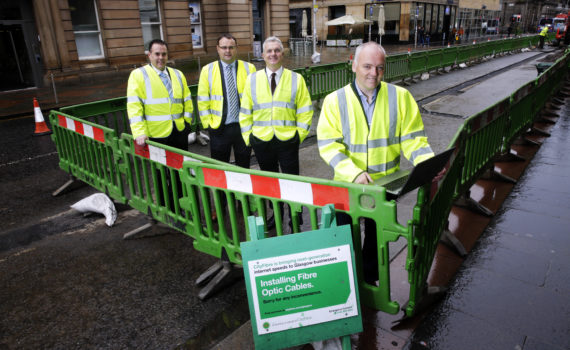 Businesses in Glasgow’s new Tontine Building in the heart of the Merchant City are set to benefit from 100% fibre connectivity thanks to alternative infrastructure provider, CityFibre.

The Gigabit City developer opened new Scottish headquarters at the Tontine last month and will invest in the construction of new digital infrastructure in the Trongate area and The Tontine itself.  This high capacity fibre network will be a completely new construction, laying a future-proof fibre foundation for Glasgow businesses as part of the ongoing transformation of the city’s digital infrastructure.

Since it opened under a year ago as part of the regeneration of Glasgow’s Merchant City area, The Tontine has attracted a number of high-growth start-ups including CodeClan, Scotland’s first digital skills academy.

Harvey Wheaton, CEO at CodeClan, said: “Having ultra-fast and reliable broadband is a must for any business these days, but particularly for a growing company like ours that is focused on developing digital excellence in Scotland. We’re firm believers that promoting and building digital skills creates opportunities for the wider economy, and having CityFibre in the Tontine providing us with the best connectivity is exactly what businesses like ours need.”

Kevin Rush, Glasgow City Council’s Head of Economic Development, said: “Full-fibre Gigabit connectivity has reached Glasgow and it will undoubtedly drive growth, productivity and innovation. There is great demand for this level of infrastructure and connectivity in Glasgow, and the Tontine Building which sits at the heart of Scotland’s first Innovation District will benefit greatly from the introduction of full fibre.”

James McClafferty, Head of Regional Development in Scotland at CityFibre, added: “Glasgow’s Gigabit City project is transforming the city into one of the most connected in the world. The case for new, full-fibre infrastructure instead of continual upgrades to ageing networks is clear. By driving this investment, Scotland can position itself for future opportunities and economic growth while laying foundations for innovation, skills development and the creation of high-value jobs.”

Glasgow’s Gigabit City fibre network will future-proof the city by supporting internet connectivity of up to 100 times faster than the UK average.

Issued on behalf of CityFibre by Weber Shandwick, PR Consultants for CityFibre. For more information or images, contact: Dyan Owen at Weber Shandwick on + 44 (0)141 333 0557 or dowen@webershandwick.com