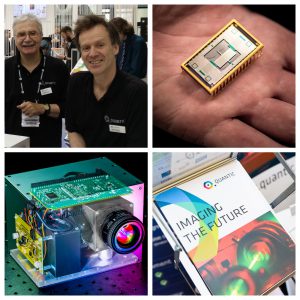 The hub will receive £28m from the UKRI’s Engineering and Physical Sciences Research Council (EPSRC) to allow it to continue its research, build on existing relationships with industry, and develop new partnerships over the next five years. QuantIC brings together the Universities of Glasgow, Bristol, Edinburgh, Heriot-Watt and Strathclyde and will also include Exeter, Imperial College London and Southampton in the next phase of activities alongside industrial partners from across the UK. The funding for the second phase of QuantIC’s operations is part of £94m announced today by Science Minister Chris Skidmore in support of the National Quantum Technologies Programme.

Since it was established in 2014 as one of four quantum hubs supported by £270m in funding from the UK Government, QuantIC has pioneered new ways to make ‘the invisible visible’ using quantum technologies. Across the consortium, the hub’s major research successes to date include the development of QuantiCAM, a digital camera which captures photons 10,000 times faster than conventional cameras, and cameras capable of novel imaging feats including looking around corners and seeing clearly through smoke. Wee-g, a portable gravity imager capable of measuring ‘earth tides’subtle changes in the earth around us has also attracted significant industrial interest for use in space, civil engineering and environmental monitoring.

Over the next five years, QuantIC will continue to develop revolutionary imaging systems that shift the way imaging occurs, such as the ability to see directly inside the human body, the ability to see through fog and smoke, to make microscopes with higher resolution and lower noise than classical physics allows, and quantum radars that cannot be jammed or confused by other radars around them.

These developments will be enabled by new technologies, such as single-photon cameras, detectors based on new materials and single-photon sensitivity in the mid-infrared spectral regions. Combined with new computational methods, QuantIC will enable UK industry to lead the global imaging revolution.