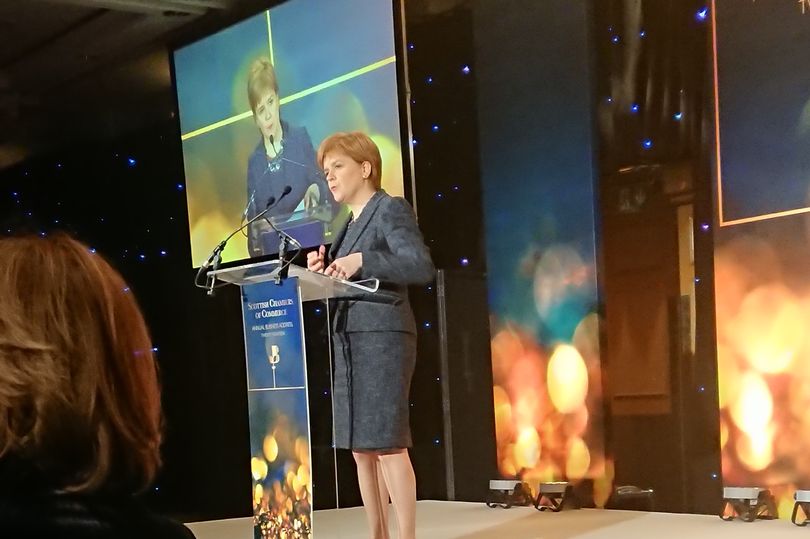 Nicola Sturgeon says cash over the next three years will support SMEs and first-time exporters as well as trade missions matching Scottish and overseas businesses.

The Scottish Government is set to provide £2 million to the Scottish Chambers of Commerce over the next three years to help SMEs and businesses exporting for the first time.

The First Minister said the Scottish Government also looked forward to "continuing and deepening" the collaboration with the Scottish Chambers "which has so much benefit for our economy".

The announcement at the dinner, which took place at Glasgow's Hilton Hotel, came amid the backdrop of increasing uncertainty over the Brexit deal debate in the Commons, culminating in Tuesday's meaningful vote, which Ms Sturgeon and Scottish Chambers president Tim Allan focused on in their speeches.

But it was on domestic matters that the First Minister also spoke at length about. She said next Wednesday's Scottish Budget "will have economic growth as a central priority" and would also ensure "the most competitive system of business rates reliefs anywhere in the UK".

"We will continue to give strong support to skills which I know is a key issue for so many employers across the country."

She added: "We are also maintaining our strong focus on innovation and internationalisation for innovation, we have already increase support for business R&D by 70% we have also invested in innovation centres in areas we know have particular growth potential such as sensor systems, aquaculture and data analysis."

But she said: "The focus on innovation goes hand in hand with a focus on internationalisation - businesses that export are more likely to be more productive, become more ambitious embrace new ideas and often in the process of exporting have to adopt new ways of working."

She said encouraging companies to look overseas "is a vital part of our approach".

The First Minister said September's Programme for Government had focused on investing £20 million in the next three years "specifically on promotion of exports".

And she highlighted last week's unveiling of Scottish Government plans for peer-to-peer mentoring to support the next wave of Scottish exporters.

In Hong Kong in April the First Minister and Scottish Chambers chief Liz Cameron attended a Chambers event bringing together businesses from Hong Kong and Scotland "to highlight our strengths in areas such as energy, fintech, life sciences and food and drink.

These events, she said, "are a powerful reminder of what a huge asset the chambers of commerce is".

"Not only do you support and help the 11,000 businesses across Scotland you also have access to an international network that reaches more than 100 countries across the globe."We look forward to continuing and deepening that collaboration which has so much benefit for our economy."